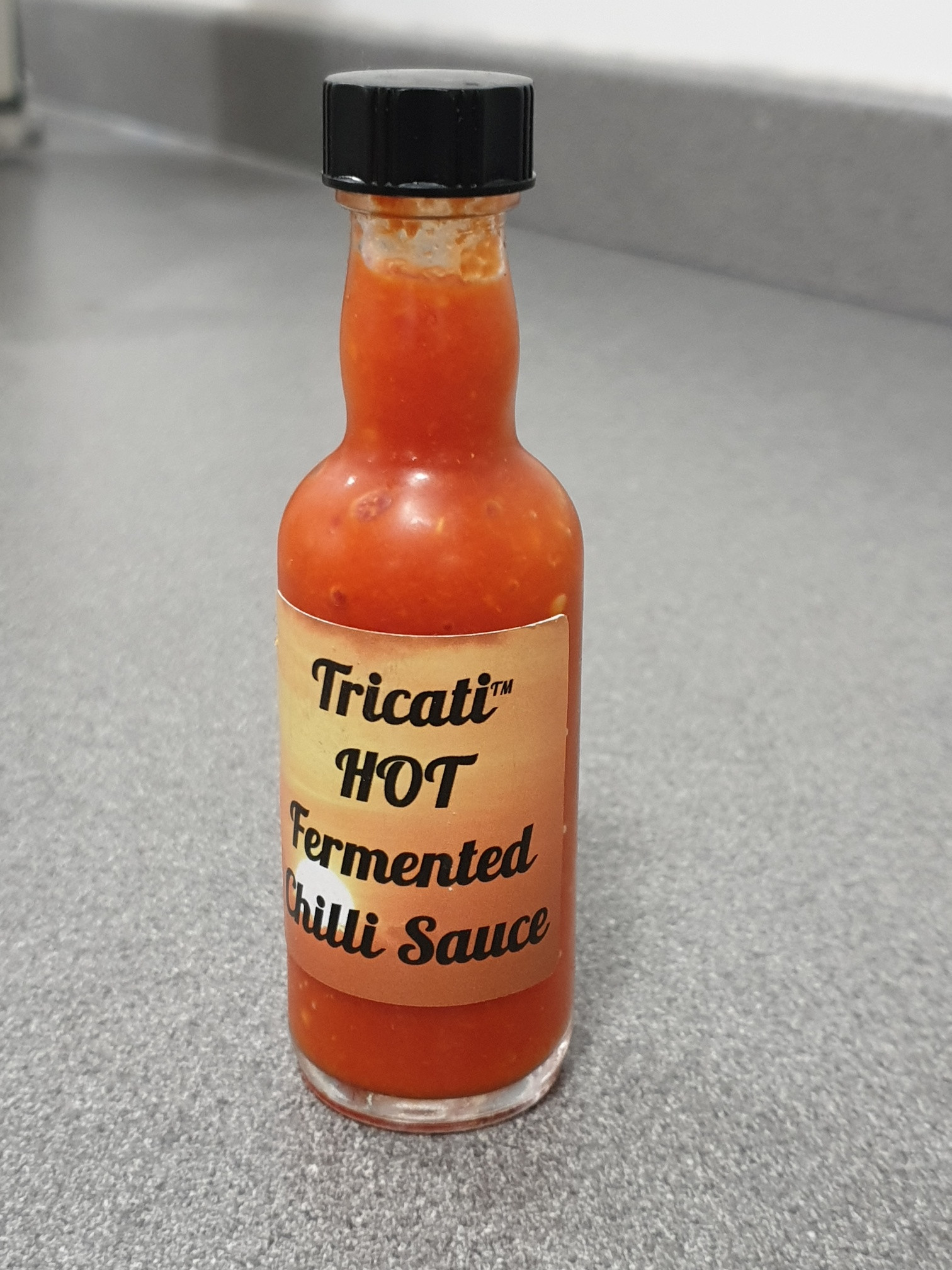 Comments
Tricati hot sauce only contains Scotch bonnet chillies. Scotch bonnet is a variety favoured in the Caribbean where it is named so because the shape of the chilli resembles the tam o’shanter woven flat cap worn by Scottish folk of old. As a chilli it differs from others not because of its heat, which is significant, but because of its sweetness and broader more complex flavour. It is not just fiery hot its actually got some flavour!

On the Scoville scale Scotch bonnet chillies are said to have a rating of 250,000 to 350,000 which is less than the likes of Nagas or Trinidad scorpions but considerably more than habaneros and the like. If you are interested, a good summary of the scale can be found at

Why this sauce is called Tricati

Crispin, my co-conspirator explains all in his own words...

Tricati hot sauce has been specially created to satisfy those people that don’t just want a fiery hot sauce but want a vinegar free sauce with strong flavour, distinction and style. The story behind the sauce starts in the Caribbean and on the way includes a custom motorcycle, a search for the missing link and has culminated in a marketable product.

Back in the 1980’s I had the pleasure of working in St Lucia as a forest officer. St Lucia is a beautiful island in the Windward Islands of the Caribbean with a culture that includes hot sauce, especially chicken cooked over coals on a hot and humid night. For a young man from the home counties this was quite an eye opener and I developed a taste for all things Caribbean, especially the hot sauce.

Over the years I have always included chilli sauce in my cooking but I’ve never really been able to get the same satisfaction that I remember having back in the day. This is, of course, a rose tinted view but, even so, I kept looking and was re energised any time I tried some homemade hot sauce either brought over by a guest or on a visit to the islands.

In the end I decided that I needed to make a sauce that touched my taste buds in just the right way, after all, life’s too short not to!<br />

The name Tricati is a portmanteau word that has a special meaning for me, it is the name of the motorcycle I made and nurtured over 30 years. (non motorcyclists turn away here!) The bike started life as Ducati 250 cc single cylinder racing bike, utterly unsuited to a young, penniless student as I was then but what a pleasure to ride, what character, performance and panache it had. But at a cost. Being Italian it was temperamental, loud and then expensive and un reliable and in the end totally impractical and unsuited to the kind of machine I needed. In a flash of brilliance I decided to sell the engine and put a 500 cc Triumph Daytona engine into the Ducati rolling chassis. Hence Tri-Cati or rather Tricati.

This conversion sounds easy and impressive but actually its surprisingly difficult to combine a left handed imperial British engine with a right handed metric Italian machine. (Without wishing to sound too mythological) I laboured for 7 years to make a bike that looked like it was made in a factory and included many custom made parts, new paint, new chrome and all the sensible modifications it would need to correct any of the original shortcomings. I could go on (for hours!) but here is a picture of me on the day I first rode it. 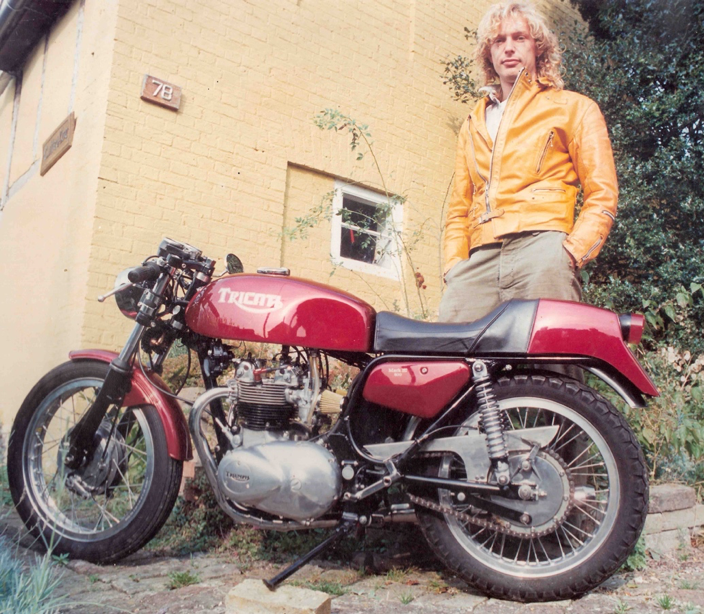 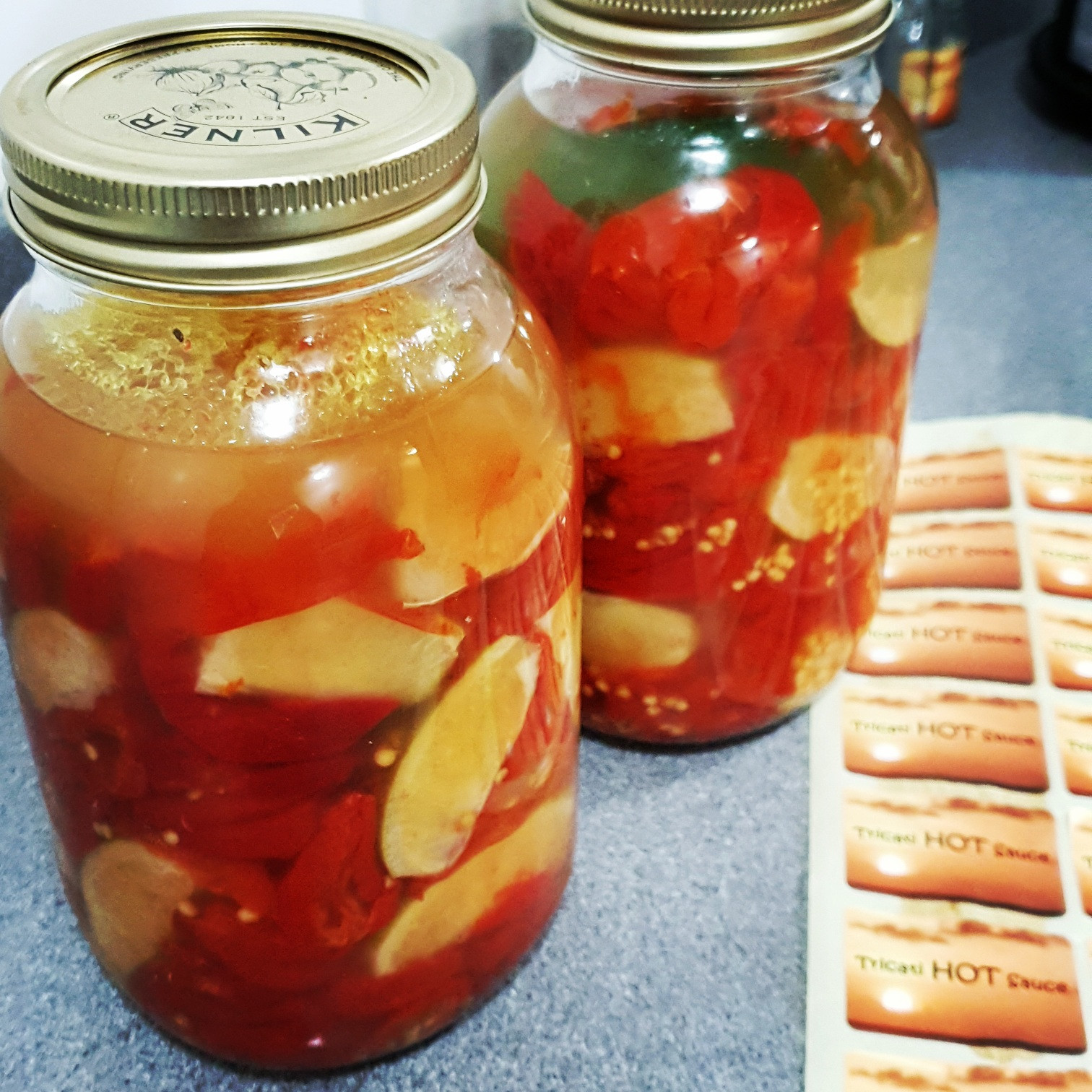 Chilli Sauce Fermentation Process
Rather than blend up chillies and stick them in vinegar we ferment them to help bring out the
flavours and create a hot sauce of distinction. The process is quite simple;
1st : red (not green orange or yellow) Scotch bonnet chillies are sourced. We have used locally grown chillies and even grown some ourselves but we have found that we can get a regular supply of plump, large, high quality imported chillies from an Indian contact in London. The chillies are not certified organic but that probably says more about the certification system than the growing process.
2nd : The chillies are washed, de stalked and cut in half, either from fresh or after a period of storage in a freezer. Any with discoloured seeds are discarded.
3rd : Large juicy limes are topped and tailed then cut into thin wedges.
4th : A 3% brine is made using the sea salt and mineral water.
5th : The chillies, seeds and all, are loaded up into large, clear, fermentation jars. Intermixed with the chillies are lime slices, perhaps a couple of limes per litre of mixture. The chillies are pressed in until the jar is full. Then the brine is poured in so that the jar is full and the chillies are under the surface of the liquid. To keep the chillies below the top of the liquid a plastic disc is pushed into the neck of the jar.
6th : The jar is secured with a lid that includes a water trap. The trap allows gas to escape but does not leave the jar’s contents exposed to the open air. The jars are then placed in a cool place and fermentation begins!

4 to 6 weeks later the chillies are ready for processing.

When ready the jars are emptied and the solids and liquid separated. The chillies are put in a blender along with the remaining juice squeezed from the fermented limes. The chillies are then blended up with some of the liquid to create a sauce of the right liquidity. When the blend is just right it is bottled, labelled and then, hopefully, enjoyed!

Its worth remembering that Tricati hot sauce, and the fresh chillies are fierce and even a small amount on your skin can be very irritating, especially if you get some in your eye, nose or other sensitive places. 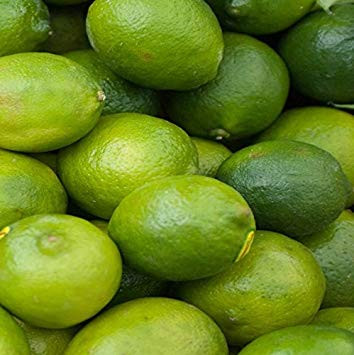 Comments
Used for the batch of mineral water in CHILL001 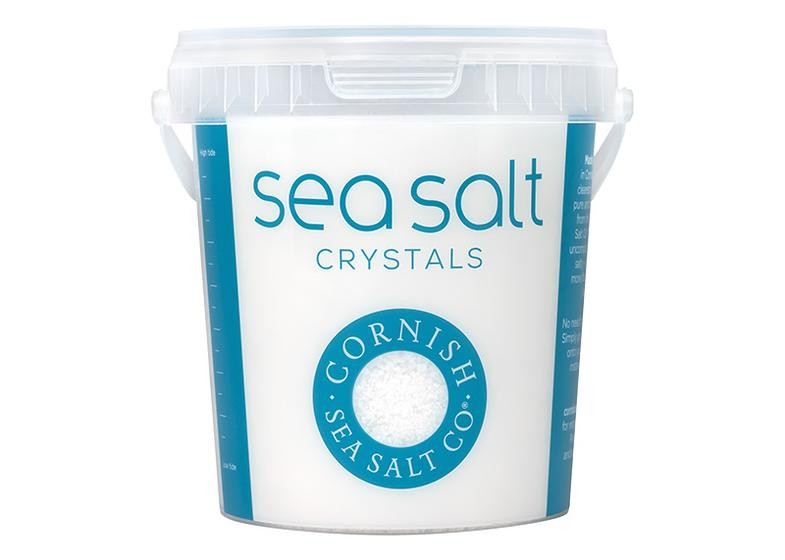 Grape Tree has a great selection of herbs and spices available in small to medium sized quantities in resealable containers which I find very useful. Everything is marked with batch and date information. 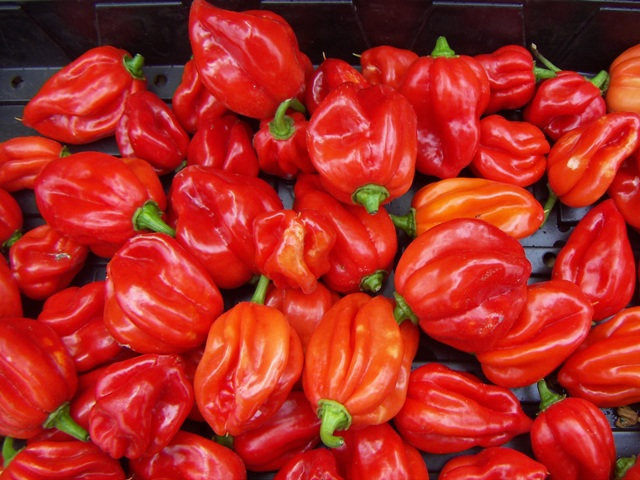